THE HISTORY OF SWIMWEAR: VOL 1 A confidence-enhancing bikini is the ultimate holiday essential, however there's much more to swimwear than sand, sea and sun.


More than any other garment, the swimsuit has acted as a sartorial barometer, reflecting the social attitudes of the times. Throughout its lifespan, swimwear has both been symbolic of restrictive attitudes towards women, as well as a symbol of female emancipation. What we now regard as classic summertime silhouettes have come a long way from their modest beginnings.


In this series we take a deep dive into the rich and fascinating history of the swimsuit, starting with its controversial entry into popular culture.


The simple act of going for a swim hasn’t always been so straightforward. Throughout the 17th and 18th century, public swimming was considered of questionable morality, therefore wasn’t a socially acceptable leisure activity. Instead, bathing took place indoors at bathhouses and spas, where it was common to be nude. In the early 1800s it was the fashion to wear white muslin shifts which turned transparent in the water. 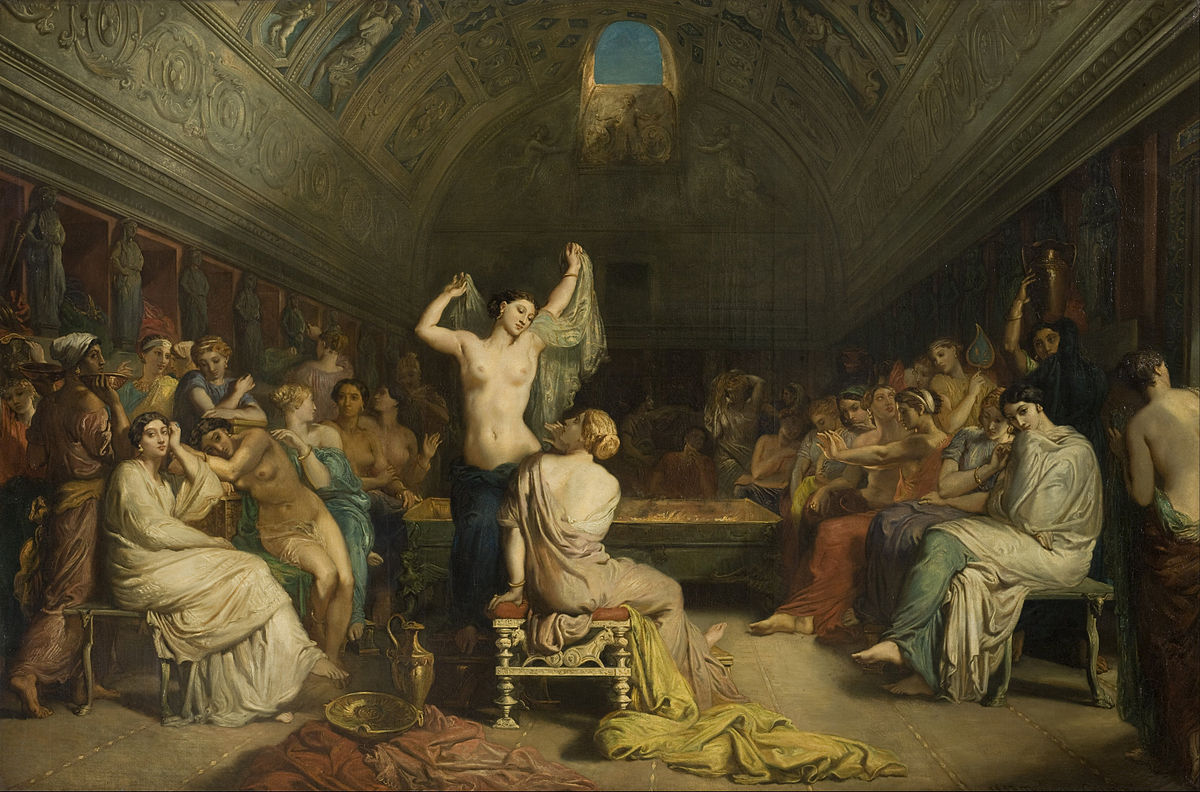 
With the development of rail travel in Europe in the 19th century came easier access to the coastline, and ocean swimming grew in popularity. However, strict modesty laws dictated that women must be covered up, even at the beach. It was de rigueur to wear voluminous dresses made from heavy cotton or wool, which had weighted skirts to stop them floating upwards and revealing undergarments. Ankle-length bloomers, bonnets, scarves and shoes completed the prohibitive outfit which allowed women to do little more than bob in the water. 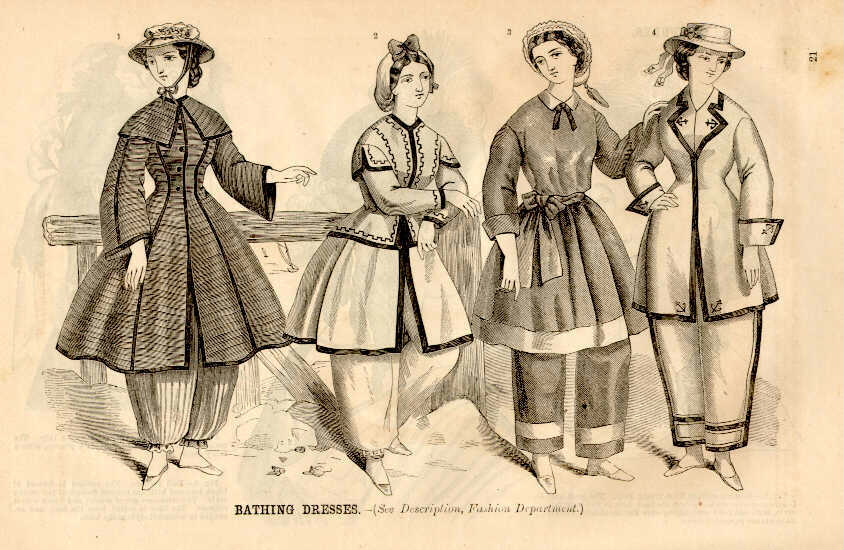 
Not every coastline was so conservative though. In France, the glamorous resorts of Deauville and Biarritz became destinations for chic, wealthy holiday makers, where a more liberal attitude prevailed. Here bathers wore costumes designed by famous couturier Charles Frederick Worth, which had a more daring silhouette featuring shorter skirts and bloomers.


When lingerie designer and activist Amelia Bloomer introduced the Princess Suit in the late 19th century, she took swimwear to newly progressive – and controversial – heights. The stripped-back outfit had knee-length hemlines and sleeves that hit above the elbow to allow women to move more freely. However, many considered the style too revealing and women could be fined if it was thought they were showing too much skin. It wasn’t uncommon for modesty wardens to patrol beaches, measuring the gap between the bottom of bathing bloomers and women’s ankles. 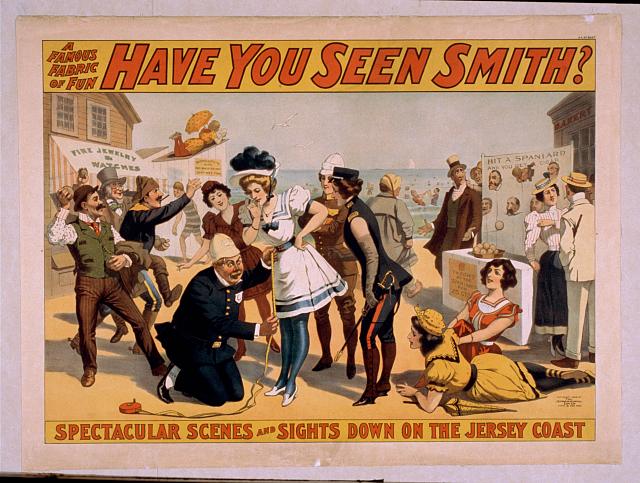 A poster for Broadway musical 'Have You Seen Smith?', 1898


A significant step towards liberating women's swimwear from its modest confines came in 1905 when the Australian professional swimmer Annette Kellerman designed her own one-piece to compete in. An adaptation of the classic men’s style of the time, her suit had a scoop neck, short sleeves and a speed-enhancing body-hugging fit. When Kellerman wore the one-piece publicly, she was arrested for indecent exposure. However her pioneering actions saw her become the first swimwear pin-up, and set the agenda for comfortable and functional swimwear to take center stage.

The birth of the swimsuit


At the turn of the 20th century, wool was still being used to craft swimwear. However, the introduction of rib-stitch and elastic latex rubber in the early 1900’s meant garments suddenly had stretch. The first modern Olympic Games in 1896 had prompted a passion for sports within popular culture, and costumes took on a streamline look to reflect this. Companies such as Speedo (originally known as MacRae Knitting Mills), started producing sleeveless, short-leg one-pieces with racer-backs. The contemporary swimsuit was born. 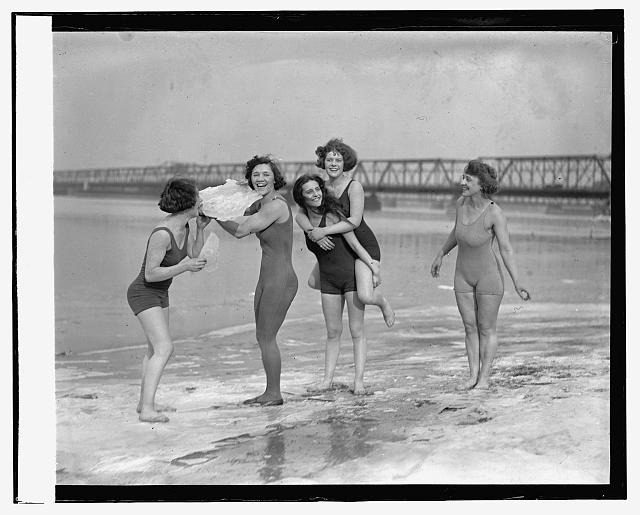 HOW TO STYLE YOUR SWIMSUIT WITH JESSICA GARCIA @by.regiina In honour of World Jellyfish day, we’d like to share with you a collection of interesting facts and... WHAT DOES ETHICALLY MADE MEAN?

Sustainability is a buzz word in the fashion industry – ﻿but what exactly does ethically made mean? And what... THE HISTORY OF SWIMWEAR: VOL 2

In the second part of our series, we take a look at the swimsuit’s evolution over the last... WISH YOU WERE HERE: HOLLY CHIPPINDALE THE HISTORY OF SWIMWEAR: VOL 1

In this series we take a deep dive into the rich and fascinating history of the swimsuit, starting... THE CORAL COLLECTION: THE ANNIE BIKINI THE CORAL COLLECTION: THE ZABEL ONE-PIECE

For our Coral Collection we wanted to honour four empowering women from history who have blazed a trail and continue to influence... THE CORAL COLLECTION: THE HEDY BIKINI

For our Coral Collection we wanted to honour four empowering women from history who have blazed a trail and continue to influence... No matter where you are in the world, an evocatively written book can transport you to destinations far...